More flexibility thanks to laser technology 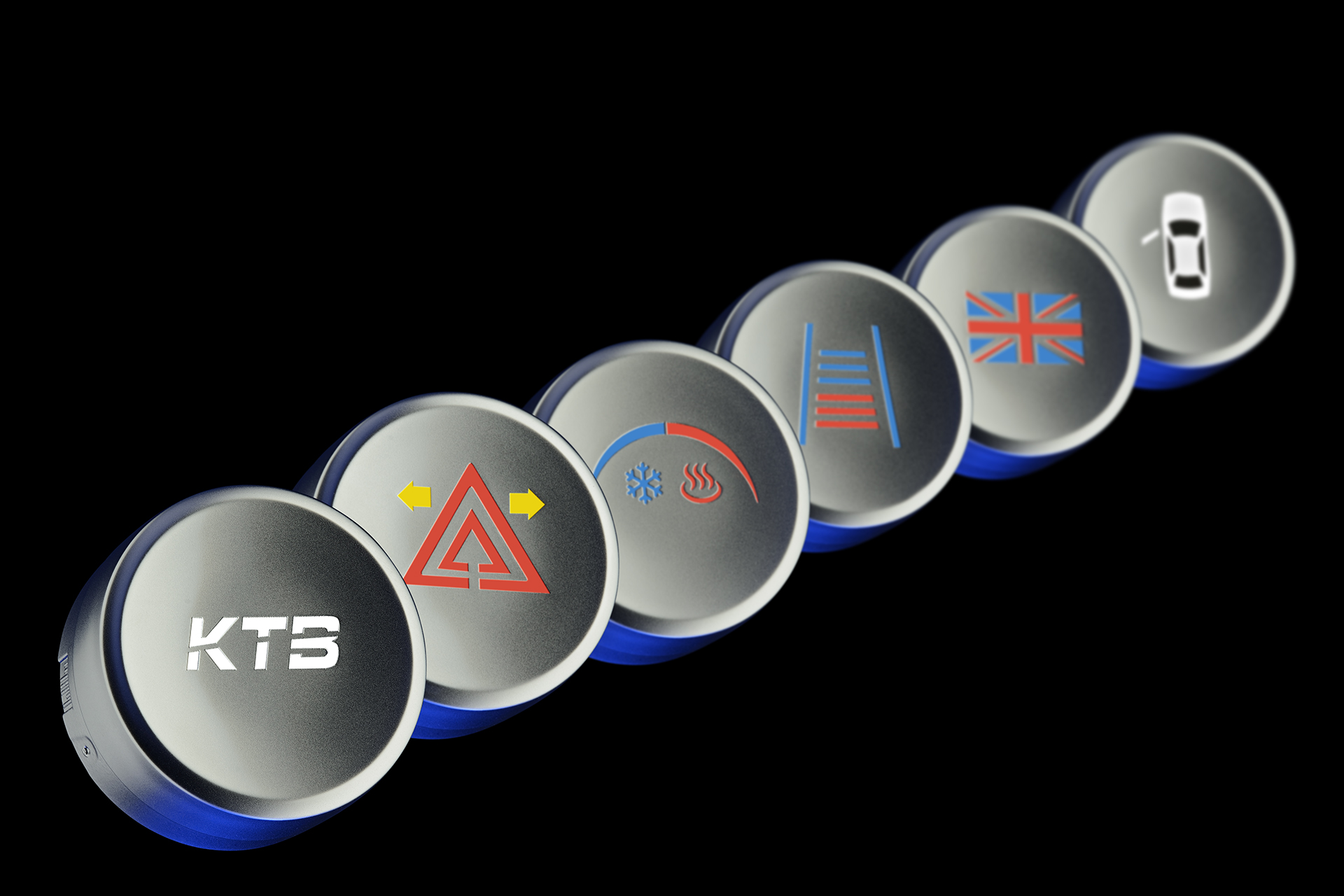 The industry is facing new challenges that require the adaptation of galvanizing processes. Kunststofftechnik Bernt GmbH solves these with an adapted process chain in which several lasers play a special role. In the litho-graphics method, a UV-curing covering lacquer is applied in the area of the symbolism. (Picture: Plastics technology Bernt GmbH)

Litho-Graphics-Method: UV-curing covering varnish in the area of symbolism.

Manufacturers swear by plastic for panels, knobs and controls in modern vehicles because the material is lighter than metal and the manufacturing and processing costs are comparatively low. In order to still meet the demands for good haptics, scratch resistance and a noble design, the plastic components are electroplated to give them a metallic surface. However, the industry is facing new challenges that make it necessary to adapt the electroplating processes. Among other things, the demands on the design and functionality of these control elements are increasing. For example, many of them have to be provided with partly multi-colored symbols and be easily recognizable at night, i.e. they must be designed in a day-night design. Kunststofftechnik Bernt GmbH meets these challenges with an adapted process chain in which several lasers play a special role. Laser technology allows a high degree of flexibility in design. In addition, symbols, fonts and structures can be implemented very sharply and cleanly to generate a high-quality appearance.

Multi-colored symbols that are backlit, finely structured surfaces and high-quality gloss with a convincing feel: these are just a few of the demands that automobile manufacturers today want to meet for a customizable interior ambience. For electroplating companies that appropriately process and finish the necessary parts before final assembly, this increasingly means developing and adapting their own processes to meet rising quality demands. Precision and attention to detail in production should be felt and visible in the vehicle. This makes it all the more important that the contrast between surfaces and symbols does not run or that they appear unclean or are unevenly backlit in the night design. However, this requires new, mature processes that go beyond normal printing methods or the simple manufacture of the components using multi-component technology.

With the multi-component technique, it is possible to let the transparent component pass through to the A visible surface and thus create illuminated symbols or structures (see picture of the roller rocker). However, there are considerable limits to the richness of detail and the fineness of the structures with this technology. Conventional printing technologies generally use tampoprinting to print a covering coating on the surface of the component to keep the illuminated structures free of the metal layer. However, these methods have the disadvantage that the edges of the translucent structures look washed out and imprecise. Laser technologies offer an alternative. Although they involve a higher initial investment, the running costs can be limited, since the otherwise necessary production and provision of new or different tools can be omitted. Laser marking allows several different variants with different symbols to be created on the basis of a component. In theory, this technology also allows the personalization of components.

However, an injection molded part cannot simply be coated with the desired metal optics and then directly processed with a laser. The applied finish is simply too thick and if the entire metal layer were to be treated, the underlying plastic would melt. For this reason, Kunststofftechnik Bernt GmbH uses a process in which the component is ejected from the system after pretreatment before the actual electroplating process and then processed with a laser. The pre-treatment layer (electroless nickel) is a very thin layer that can still be easily processed with the laser without excessive heat input into the plastic component. Due to the fast and punctual processing, very fine geometries and symbols can be defined and worked out. The high precision ensures good reproducibility, so that automation is both sensible and possible for large quantities.

But there are further challenges: Many components today must represent a closed surface in daytime design and be translucent in night-time design. This is achieved with many fine structures, such as rectangles with an edge length of less than 0.5 millimeters. The production of such structures requires laser systems of the highest precision and very fast scan heads. Kunststofftechnik Bernt has several such precision lasers.

In principle, this method is suitable for all components that are to be X-rayed in day-night design. How precisely the laser can structure the surface can be shown with a magnification of a typical component (see picture): If, for example, the elongated area of a decorative panel is to be fitted with fine diamonds measuring 200 x 200 μm and spaced 50 μm apart, the laser can be moved very close to the edge surface without risking inaccuracies. The high repetition accuracy allows for the exact and reproducible production of about 40,000 squares in a few minutes.

Since Kunststofftechnik Bernt has its own injection moulding facilities, raw parts consisting of three components can also be produced on site. In addition to 2K components, these can also be easily structured and processed with a laser. An additional component is useful, for example, to prevent creaking noises and to enable active steering wheel lighting. Active steering wheel illumination means that individual symbols are illuminated separately from the others. This requires light-tight bulkheads that prevent extraneous light from illuminating the other symbols. In both cases, an intermediate layer is necessary, which serves either as a noise buffer or as a light barrier. The lowest layer below the symbols is formed by light guide components made of transparent polycarbonate (PC), which scatter the light and direct it to the surface. The middle layer is black PC, which acts as a light barrier or light labyrinth. It separates the illuminated areas from the non-illuminated areas. The third component is a plastic (for example ABS/PC), which can then be electroplated. A fully automatic camera control in the injection molding, laser and final quality control process stages checks the radioscopy and the symbol position.

In addition to an extended day-night design, car manufacturers are increasingly requesting brushed surfaces on the fascia panels and other components to achieve a noble, aluminum-like appearance. Kunststofftechnik Bernt has developed the Textured Plating Technology for this purpose. Here, injection molded parts are produced with a tool in which the visible side (often the nozzle side of the tool) is structured by laser processing in such a way that the resulting molded part receives a brush structure. However, when such a part is conventionally electroplated, the copper layer in particular provides a certain leveling of the structure. This is intentional with normal components, as it conceals minor surface defects and, for example, conjunctiva, making them less visible. However, brushed components look more artificial and not really brushed. In a coating process specially developed by Kunststofftechnik Bernt for this application, this levelling is reduced to a minimum, resulting in components that only a specialist can distinguish from components that are actually brushed.

With Illuminated Brush, lighting can now be combined with this technology. For Bernt plastics technology, the use of lasers on the component offers the decisive advantage that the brush structure can be illuminated over a large area by removing the electroless nickel layer in the direction of the brush structure. The process can be applied to the entire component as well as to parts of it.
Litho-Graphics®: Curing symbols and graphics with laser

A further development of the proven laser process from Kunststofftechnik Bernt should pursue two main goals. On the one hand, a process should be offered at lower costs and on the other hand, the flexibility with regard to design and coloring should be increased. However, accuracy and edge sharpness should be at a similar level if possible. This has been achieved with the development of the Litho-Graphics® process. In this method, a UV-curing covering lacquer is applied in the area of the symbolism. This can be done with different methods. In addition to a spray application such as lacquering, for example, printing with Tampoprint has proven to be a successful method. As far as accuracy and edge sharpness are concerned, this process cannot reach the level of laser technology by far. However, this is not necessary at all, since the UV coating is only cured with a UV laser exactly where the symbolism is needed. Excess, uncured coating is then cleaned off. On the cost side, the fact that the components can now be electroplated in one process and do not have to be discharged from the electroplating plant after pretreatment is a positive factor. This is because the process described above can be carried out directly on the injection molding raw part. At the same time it is also the laser in Litho-Graphics® that ensures the flexibility, accuracy and edge sharpness of the process. In the course of the development the possibility of a multi-color symbolism has now been added. In the printing process, up to four different colors can be applied in one step. In addition to the classic motifs such as the window regulator symbol, typical multi-colored identification marks are now also added, such as the manufacturer’s brand symbols or flags that are translucent.

REACH: Chromium(III) as a possible alternative to chromium(VI)

Since September 2017, chromium(VI) can only be used under very strict regulations and for a limited time. Current plans assume authorization until at least 2024. Kunststofftechnik Bernt is already working intensively on alternatives. Since September 2019, all the technologies described above, as well as conventional components, have been available with a chrome(III) coating. The first components are already in series production.

Increasing demands on the design as well as stricter regulations by the legislator with regard to the choice of materials should ideally be met in electroplating by adapting the individual process steps with the integration of new technologies, even if this may initially mean a higher investment. Taking laser technology as an example, it is clear that the greater flexibility in processing achieved as a result can have a positive effect on running costs and the final quality of the product. In addition, by combining already optimized processes, it is also possible to realize extended functionality with high design and material quality. For example, 3K technology, brushed surfaces and alternating fluoroscopy can be combined well.